Jakub Čech is an unprofessional artist living in Slavkov u Brna. The author is 22 years old. In his paints he creates a new fantasy world with his own rules. Into this world you can find ordinary things of daily use, landscape motifs and people. Recently, the author is interested intensely in the reinterpretation of selected works of “Czech art brut”. His art works are identified by his expressive and unique choice of color range. He paints on canvas with acrylic colors. 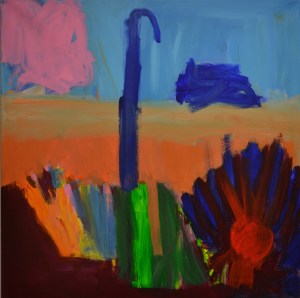 Tomáš Koudelka is unprofessional artist living in Náměšť nad Oslavou. At present, he is 36 years old. He has been interest in painting for a long time. His favorite artist is Josef Lada and Tomáš was also inspired by him. He looks for topics in the urban and natural landscape. The author develops his own specific iconography and visual language. His technique is oil paints on canvas. Ondřej Farkas is unprofessional artist living with his parents in Brno. Ondřej is currently 25 years old. The main topics of his work are about matters of daily needs (mats, baskets, chess, trams etc.). He often uses ornament as a decorative element that serves to beautify buildings, walls, surfaces, fabrics and objects of all the kinds. Expressiveness of painting and the lines are influenced by a careful consideration of art practices. Jiřina Bartůňková is an unprofessional artist living in Náměšť nad Oslavou. She is 31 years old. She has been interested for a long time on spiritual drawing and landscape photography. Her series of fantasy drawings contains many stylized plant motifs and fanciful elements. Her art work deals with fundamental problems of Christian humanity and human intimacy, including the author’s themes of love, faith, harmony, understanding, and pain. The author created only for her needs and her friends. The necessity of media attention in the gallery space is a new experience for her and a complex subject. Pavla Pravdíková is an unprofessional artist and she is currently 30 years. Her drawing and stories are for her a specific form of communication and reflection of many life situations and experiences. She portrays many of her friends in the community of persons with disabilities. The phenomenon of disability is often the subject of her work. The drawings are distinguished by a surprising of expressiveness similar to “brutality art brut”. She also to involve topic about people with disability and we can say that she uses characters of the art direction disability art. Lucie Němcová is an unprofessional artist living in Brno. She is just 24 years old and she has a big experience with exhibition activities together with curator Pavel Sochor. She is trying to express through paintings her feelings and distinctive view of the world around her. Because of her otherness Lucie has ability to perceive her surroundings and herself in a unique way. The theme of her paintings are colorful mosaic of life situations, of her family, of friends and of people who influenced her in different ways. Creation is her unique communication tool, with which she can communicate and permanently record her feelings and thoughts. For more information about her art work visit: https://svetlucie.wordpress.com/ Petr Kolař is an unprofessional artist living in Brno. At present he is 16 years. In his work he has been involved in drawing and painting. Typically his works are characterized by abstractions associated with radiant expressiveness colors. Petr has the gift of perceiving the world around him in an original way. His paintings show the richness of his fantasy world and demonstrate his extraordinary creative abilities. Art work of Petr Kolář undoubtedly represents the phenomenon of otherness. His work is an inspiration for many designers and professional artists. Ivona Záborská is an unprofessional artist living in Kamélie center based in Křizanov. Currently, she is 48 years old. She has been devoted for a long time to painting and drawing with distinctive figurative elements. The author’s work strongly reflects her relations with the family, people and the communities in which she lives. Creation is her life. The iconography of her paintings is characterized by expressive colors and distinctive symbols. Her works have resemblance with Primitivism in 20th Century Art and of course with the style of art brut (J. Dubuffet).